Well in two nights in Oregon we have experienced the worst campground ever and the best so far.
We were trying to get to Hood River for our first night but by around 5PM we knew that we did not want to keep going that far. We still had about 200 miles to go. So we used some iPhone app to find a place to stay near Baker City, a very nice historic town along the Oregon Trail. We chose Lookout RV Park since it was Good Sam approved. It was an asphalt parking lot with hookups. Not a blade of grass or a single tree or bush could be found. Everything was wrong. The utilities were at the front of the sites requiring the full extent of the hose, electric cord and cable. The sewer hookup was uphill from the trailer pad requiring shit to defy gravity. Please consult with Einstein & Newton when installing a sewer system. Well the owner was nice, the laundry was clean and at least there was a "lookout" view. 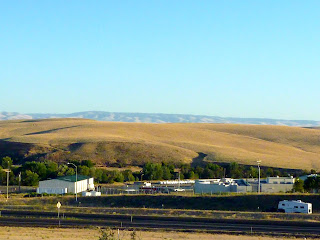 The next day we pulled into Memaloose State Park recommended by Kim at Small Small Trailer. Thanks, Kim, this is a great place to stay. We are sorry we didn't push forward the day before to get here. After setting up our trailer we drove into Hood River to see the town and get something quick to eat. 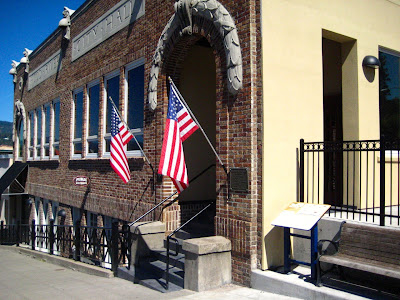 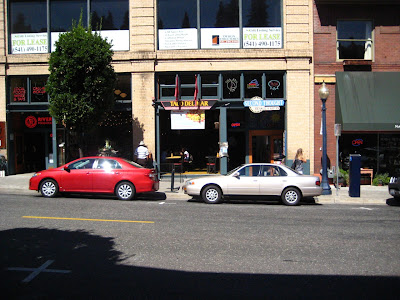 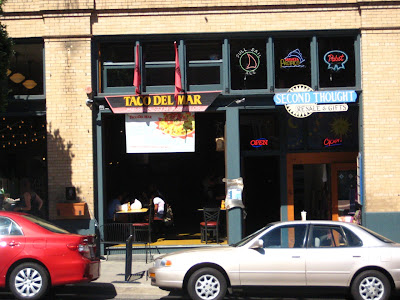 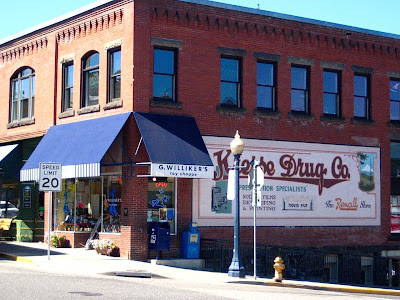 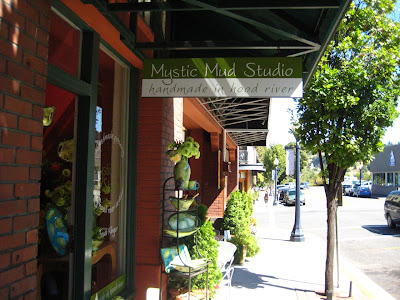 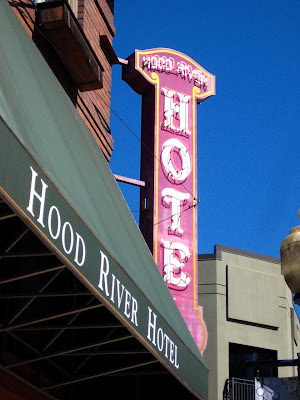 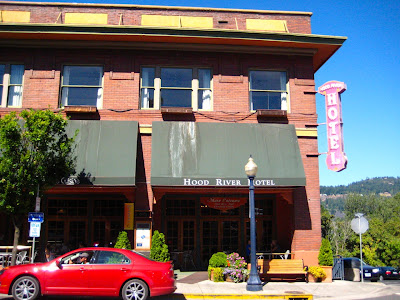 The Memaloose SP campground was right on the Columbia River. We arrived without reservations and  did not have any trouble getting a spot for one night. The next day was completely booked for the Labor Day Weekend. 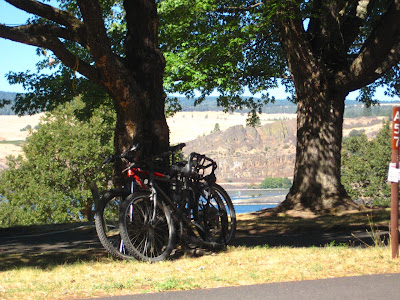 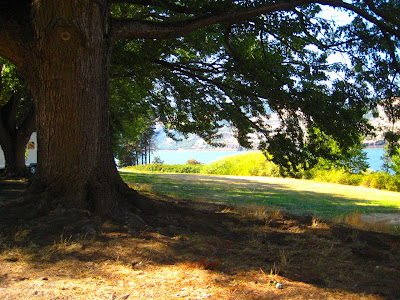 We will be spending the Labor Day Weekend near Portland on the Columbia River. I hope the campsite is half as nice as this one.

I have been waiting to see this sign for most of my life. 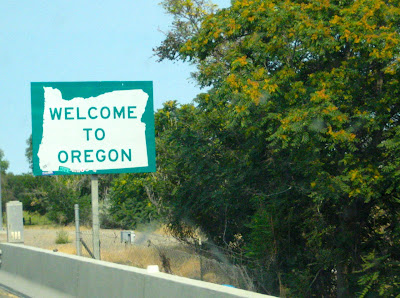 When I was a boy of 9 or 10 I read my first full length book and it was about a boy and his family who were on their way to the Oregon Territory. They encountered rivers and mountains, bears and wolves, indians and bad guys. It was quite and adventure and it sparked my interest in Oregon ever since. In spite of this interest I had never set foot in this state until today. This is the last of the 50 states for me to visit. It was a deeply emotional experience it was. I plan to spend the next month or so right here. 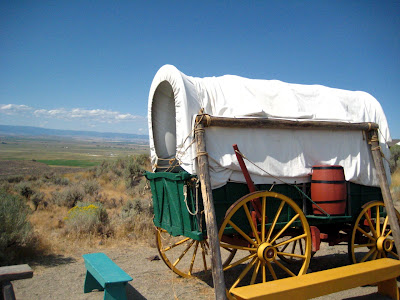 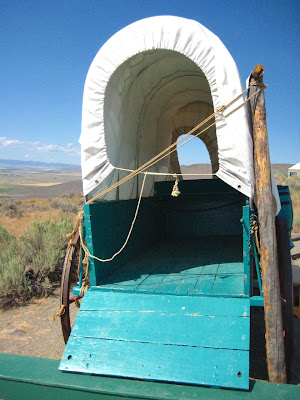 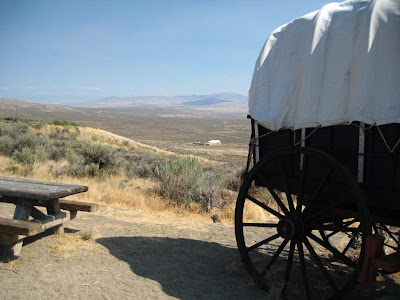 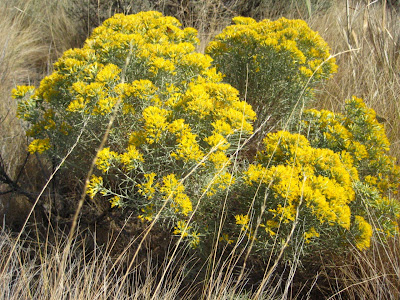 Posted by Frank DiBona at 8:05 AM No comments:

We had a fantastic week at Alumafandango in Lakeside, Colorado. Rich Luhr and his staff says there were some problems setting up this inaugural event but we hardly noticed. I know we didn't have water or electricity for about 10 minutes and, gosh knows,  that was terrible.

The very first people we met at the rally were Ken and Julie pictured below. Ken asked me where I was from. "South Carolina",  I said. "Where in South Carolina?"  he asked. "Aiken" I responded. "Really, what part of Aiken?". "You've heard of Aiken?" "Yes, we have a house there". It turns out that I had spoken to them several months ago when a mutual friend told me of their Airstreaming. Nice to meet them in person. Julie was at exercise classes every day. Ken was very helpful in solving Airstream problems. 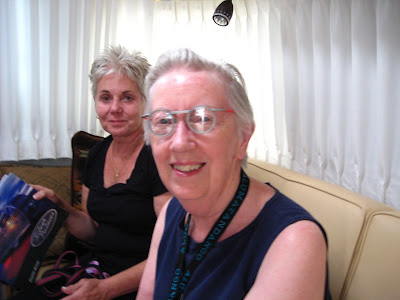 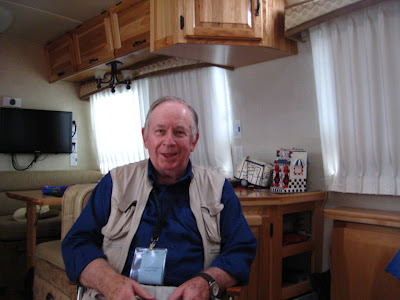 We took a tour of Timeless Travel Trailers, co-sponsor of the event and experts in rebuilding, designing and redesigning Airstreams and other classic trailers. 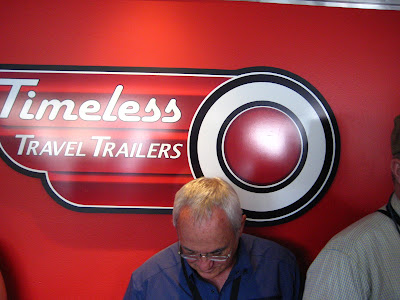 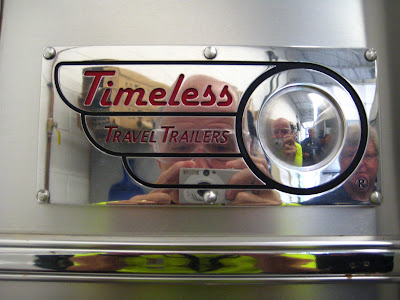 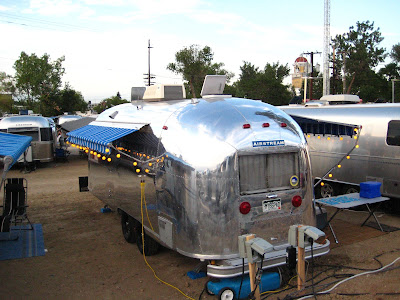 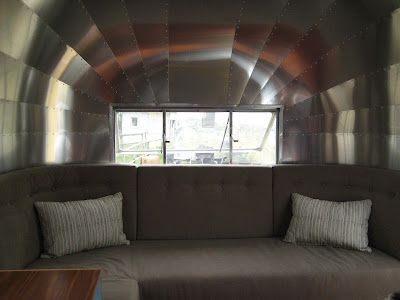 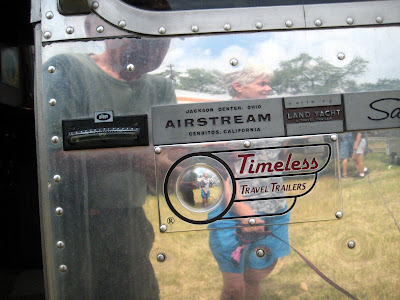 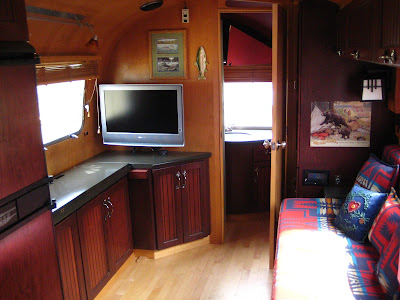 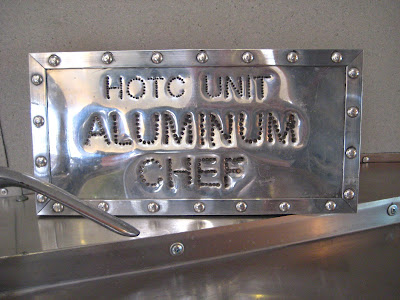 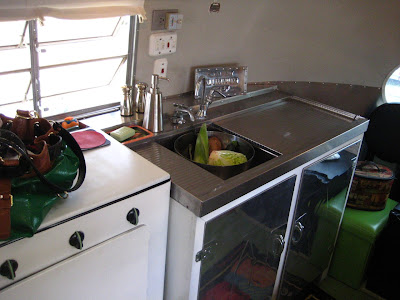 We met in person many people we had only met virtually before. Below are Marlene, the pretty one with the smile and, what-can-I say, Dan 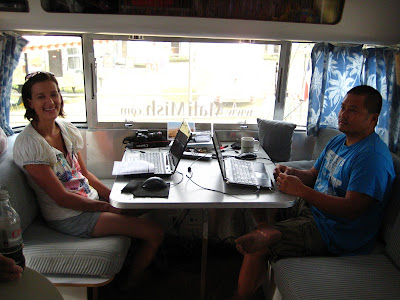 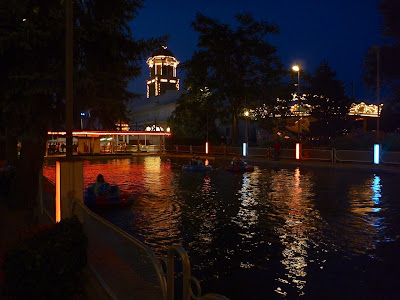 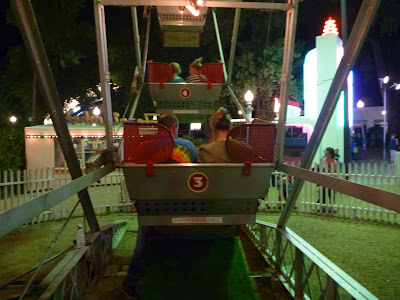 Here is an aerial shot of Diva. Just ignore all those other so-called Airstreams surrounding Diva


To see some other pictures of Diva, and who wouldn't want to?, go to Kyle and Mary's post.

http://channelsurfingwithgas.com/alumafandango-open-house/
Diva is featured in #84 to 90.

We are now on our way to Oregon via Utah and Idaho.